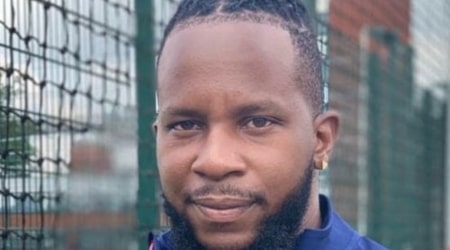 Kyle Meyers is a Barbadian professional cricketer who has represented West Indies in all 3 formats of the game (Test, ODI and T20I) as a batting all-rounder. Before joining the senior national team in 2020, he won the 2012 . had participated in Under-19 ICC Cricket World Cup, helps his team finish in a credible sixth place. In his team’s first match of that tournament, he recorded impressive figures of 2/35 in 10 overs and scored a crucial 43, a performance for which he was named ‘Player of the Match’. In the next match, against Papua New Guinea, he again recorded sensational figures of 3/12. He was also the team’s best bowler in their quarter-final match (3/42) against New Zealand, but could not stop the loss by 3 wickets. In the Caribbean domestic circuit, he has played for Combined Campus and Colleges (2011-12–2014–15), Barbados (2012–13, 2019-20), and the Windward Islands (2015–16–2018–19) in all 3 formats. In cpl (Caribbean Premier League), he has represented T20 franchise teams Barbados Tridents (2013-2014, 2017-2020) and St. Lucia Zooxo (2015-2017). In May 2022, he was awarded his first red-ball central contract. Cricket West Indies (CWI), the governing body for cricket in the West Indies (a sports federation of more than a dozen predominantly English-speaking Caribbean countries and dependencies that once constituted the British West Indies).

Kyle has a daughter named N’Kyah Mayers (b. August 2013) from an unnamed relationship.

He is of Afro-Barbadian descent.