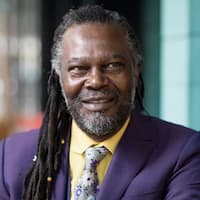 Levi is of British and Jamaican nationality. He was born in Clarendon, Jamaica. He is of mixed ethnicity/heritage/descent. Read more: Jonathan Carly

After his parents relocated to the UK, Roots was raised and joined by his grandmother until the age of 11. He was raised as a Christian, but at the age of 18, he converted to the Rastafari religion. When they spoke on BBC Radio 4’s Desert Island Discs, Roots admitted that her father was a “little stranger” to her and that this made their relationship difficult.

He claimed that all his siblings attended school before immigrating from Jamaica, but because he was the youngest, he never attended any classes there. He feels as if he has turned her down a bit. The Roots have eight children born to seven different mothers.

Levy has an estimated net worth of $45 million.

Does Levi Roots have a restaurant? The Papin Jerk Centre, the first installation by Roots in London, operated from 2010 to 2012 on the Winstonley Estate in Battersea, Clapham Junction. He was working with his children. Before closing, the business served lunch at a nearby school (Thames Christian College). Levi Roots launched its first franchise eatery in December 2015 in Westfield Stratford City. 2019 kicked it off.

Roots’ Reggae Cookbook was distributed in 2008, with a preface by Roots’ financial backer Peter Jones. The book contains parts of the introduction to the Roots’ arrival in London and fixing the Caribbean. To agree to the arrival of his recipe book, Roots showed up on a 3 June 2008 episode of the BBC’s Ready Constant Cook as a superstar. He finished second against Leslie Waters.

Roots had a TV cooking show, Caribbean Food Made Simple, on BBC 2, in which a book of the same name was distributed in August 2009. The show followed Roots as they demonstrated simple methods for preparing Caribbean food in every part of the UK and Jamaica. House.

Roots appeared on Superstar Brains in 2010, coming next with 13 spots. He also appeared on Elder Siblings, where he cooked a Caribbean grill for the family. Roots similarly appeared in the 2011 cosmopolitan satire film Anuvahood, where he played himself. On 22 February 2018, he appeared in the eighth episode of the seventh series of the BBC analyst program Passing in Heaven. He played the role of Billy Springer.

The Roots shares the stage with James Brown and Maxi Priest, and in 1998, he was nominated for a MOBO for Best Reggae Act. While living in the UK, she was friends with Bob Marley, and during a 1996 visit to Brixton, she sang “Happy Birthday Mr President” to Nelson Mandela. His popularity rose after he appeared in the 2007 season of the UK television show Dragons Den, where he received a £50,000 investment for his reggae reggae sauce.

Levi Roots Reggae Sauce is a jerk grill sauce. In 2006, 4,000 containers of the sauce were sold at the Notting Slope Fair. He later took the sauce to a Food Career Expo, where he was spotted by a BBC producer who turned to him to show it on the Winged Serpents Layer. He appeared in the main episode of the fourth series in February 2007, seeking £50,000 speculation from Winged Serpents for a 20% price share in reggae sauce. Despite mistakenly guaranteeing that he had a request for 2.5 million liters of sauce (when in fact the request was for 2,500 kg), he was offered £50,000 by Peter Jones and Richard for a 40% stake in his business. . Farley. Soon after their appearance at the event, Sainsbury’s announced that they would stock the sauce in their 600 stores.

Driving by the result of his flamboyant sauce, Roots delivers a drawn out version of his tune “Reggae Sauce”, which highlights one of his young (Joan) backing vocals. The music video includes an appearance by Peter Jones. All the money raised went to entertainment.

The tune, which shaped his pitch piece on the Winged Serpents’ Sanctum (and similarly sung by Roots in an appearance on Harry Slope’s televised Burp), was additionally distributed as a download single. “The Legitimate Chime (The Reggae Sauce Melody)” accepted its most memorable play at Alan Lake’s morning food show at the center. A 2010 report by The Merchant magazine stated that the ready-to-eat treats were to be discontinued and Roots expressed that the value of the brand had then risen to £30 million.