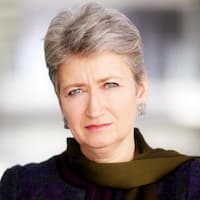 Lindsay Hilsom is an English journalist and author. In addition to contributing regularly to The Sunday Times, The Observer, The Guardian, New Statesman and Granta, she also serves as the International Editor for Channel 4 News.

Lindsay studied French and Spanish at the University of Exeter after attending Worcester Grammar School for Girls.

What nationality is Lindsay Hilsom? Lindsay is of British nationality by birth. She is of mixed ethnicity/heritage/ancestry. Read more: Michael Vignoll

Lindsay is the daughter of Professor Cyril Hilsom and Betty Hilsom. Her father is Herfethis, a physicist known for his work on the foundations of contemporary LCD technology.

Hilsom currently has no husband and is not married. In the 60s, she is still engaged in her work.

Lindsay stands at a height of 4 feet 4 inches.

Lindsay has an estimated net worth of $2 million.

Lindsay was linked with a frontline Marine unit during the US attack on Fallujah in 2004, and in 1994, when the genocide first began in Rwanda, she was the only English-speaking foreign correspondent there.

His first book, Sandstorm: Libya in the Time of Revolution, was released by Penguin Press in the US in May 2012 and Faber in the UK in April 2012. It was named to the Guardian First Book Award 2012 Shortlist. In November 2018, Farrar, Strauss and Giroux released their second book, In Extremis: The Life and Death of the War Correspondent Mary Colvin. In January 2019, Chatto & Windsor released it in the UK. This book is included in the Biography category of the 2019 Costa Book Prize Shortlist.

The International Editor of Channel 4 News is Lindsay Hilsom. She has written about all major wars, including Kosovo, Afghanistan, Iraq and the Israel-Palestinian conflict. She covered the 2011 uprisings in Libya, Bahrain, Egypt and Bahrain. She has also produced extensive reports from Iran and Zimbabwe, and from 2006 to 2008, she served as China correspondent for Channel 4 News. Before becoming a journalist, he worked as an aid worker, first in Africa and then in Latin America.

In an interview with The Oxford Student in 2010, Hilsom said that “the American news media almost never shows images of death, murder, injury – the result was that people thought it was a blood-free war, And it affects how people feel and what their government does.”

In contrast, the Arab news media broadcast much more graphic depictions of the reality of the war. He argues that the key consideration in determining what is appropriate to broadcast from conflict zones is “whether you are using those images as propaganda, or whether you are using them to tell the truth about war.” And there are people to tell.” Although she admits that this is “a very difficult thing to get right,” she is adamant that a foreign correspondent should not use emotional imagery to “make a political point”.

Hilsom received an honorary doctorate from the University of Essex in 2004 and has won numerous accolades including the Charles Wheeler Award, James Cameron Award, Amnesty International, Voice of the Listener and Viewer Award, Royal Television Society Journalist of the Year and One World Award. Broadcasting Trust Award. He received the Patron Medal from the Royal Geographical Society in 2017. For Extremis, he was awarded the 2018 James Tait Black Memorial Prize in Biography.