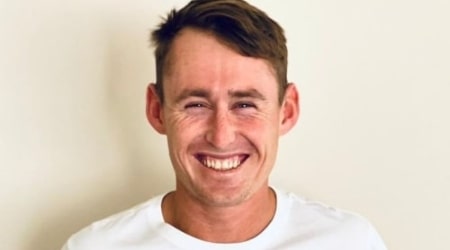 Marnus Labuschagne is an Australian professional cricketer who has represented his country as a batting all-rounder in both the longer formats of the game (Test and ODI). In the Australian domestic circuit, he has played for Queensland (2014–15–present) in all 3 formats. he’s also out Brisbane Heat (2016-17-present) in bbl (Big Bash League). A rare occurrence in modern cricket, Marnus has also played domestic cricket outside his home country, representing Glamorgan County Cricket Club (2019–present) in England. In January 2020, he won the ‘Emerging Cricketer of the Year’ award in the annual ICC (International Cricket Council) Prize, The following month, he won the ‘Test Player of the Year’ award in the annual CA (cricket australia) Prize, In April that year, he was named as one of the 5 ‘Cricketers of the Year’ by Wisden Cricketers AlmanacA cricket reference book that is published annually and is often referred to as the ‘Bible of Cricket’.

He is of Afrikaner descent.

Marnus is sponsored by –