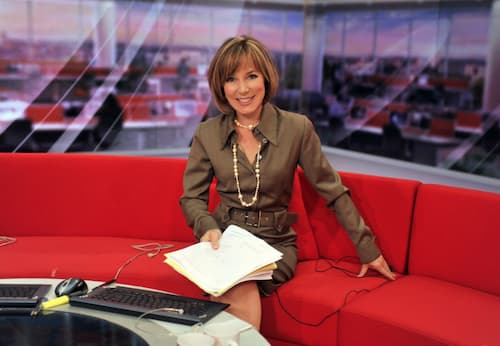 Sean Williams is a noted Welsh journalist, current affairs broadcaster, and a psychologist known for her work with the BBC. Williams hosted the weekday editions of BBC Breakfast as well as all major news bulletins on the BBC. He hosted two seasons of BBC One’s debate show Sunday Morning Live.

How old is Cyan? She is 57 years old as of 2021. She was born as Sean Marie Williams on 28 November 1964 in Paddington, London, England. Cyan celebrates his birthday every 28 November.

The Welsh journalist stands at a height of 5 feet 3 inches (1.59 m). Still, she has not shared much data related to her other body measurements in the public domain. Also, we will update this section once the data is provided. Read also: Jack Canfield

Sean is a US citizen and citizen by birth. He was born in Paddington, London, England. She is of mixed ethnicity/heritage/ancestry. She comes from a large extended family and is proud of her Welsh ancestry.

She was born and raised in Paddington, London, England, as the daughter of Katherine Rees, a Llanelli native, who moved to London to pursue a career as a nurse. His father was a farmer from Glamorgan.

Since February 1991, Cyan was married to Neale Hunt, a former director of the advertising firm McCann Erickson, and the couple had two children. Following the divorce, Williams married Paul Woolwich in 2006 and gave birth to their third son in October 2006. Williams gave birth to a daughter in March 2009.

Sian had four children, three sons and one daughter, two from his first marriage and the other two from his second marriage.

Sean the Welsh journalist has an estimated net worth of between $1 million – and $5 million.

In 1985, he began working as a reporter and producer for BBC local radio stations in Liverpool, Sheffield, Leeds and Manchester. He worked as an editor for BBC Radio 4’s The World at One and PM programs from 1990 to 1997. Williams has served as a program editor for various news and election programs on BBC Radio 4 and BBC Radio 5 Live. Prior to the channel’s launch in 1997, Williams worked as an output editor for BBC News 24. When one of the potential presenters became ill during the screening process, Williams was asked to fill in. The producers were so impressed with her performance that they promoted her; she worked for the channel for almost two years, co-hosting from 4:00 pm to 7:00 pm, BBC One’s Six O’Clock in 1999. Until becoming a special correspondent for News.

During Fiona Bruce’s maternity leave in 2001, she worked as a relief presenter for Bulletin before becoming the primary presenter on Fridays. Williams was also a regular on BBC One’s weekend news show. Williams joined BBC Breakfast as a relief presenter on 12 January 2001. Williams filled in for Raworth on Six O’Clock News during her maternity leave in 2004, co-presenting with George Alagia, and the following year, she covered the 2004 Indian. Ocean earthquakes in Sri Lanka and Thailand, as well as the Kashmir earthquake in Pakistan. Williams left BBC Breakfast when the production team was relocated to Salford on 15 March 2012. She returned to BBC Radio 4 in 2012 as a co-host of Saturday Live. In addition to news and current affairs, Williams has hosted shows such as The One Show, Big Welsh Challenge, Now You’re Talking and City Hospital.

In 2010, Williams worked as a reporter for Watchdog. In 2013, she and Nicky Campbell and Rebecca Wilcox co-hosted Your Money, There Tricks. Tanny Grey-Thompson, Susan Packer, and Sean Phillips were among the guests on Williams’ three-part interview series for BBC One Wales, The Sean Williams Interview. Williams took over as the new host of BBC One’s religious and moral debate show Sunday Morning Live in June 2014. He hosted the show for two seasons before stepping down in June 2016 and was replaced by Naga Munchetti. Williams announced his departure from the BBC on 5 November 2015 to become the new main presenter of 5 News. On 4 January 2016, he delivered his first 5 news bulletins. From 2017 to the present, she is co-hosting Save Money: Good Health on ITV along with Ranj Singh and ‘Secrets of Your Supermarket’.